In ancient mythology, Atlantis was the great city of the Atlantic Ocean. It was a place like no other, combining technology and nature, science and esotery, health and life. For some it was a literal creation of a great philosopher, for many others something to aspire to. For long years it has been lost to us, for long years people sought after it – the idea of it. The expedition that started in ancient times is finally over – Atlantis is getting reborn as the center of living, tourism, production, creativity and health. 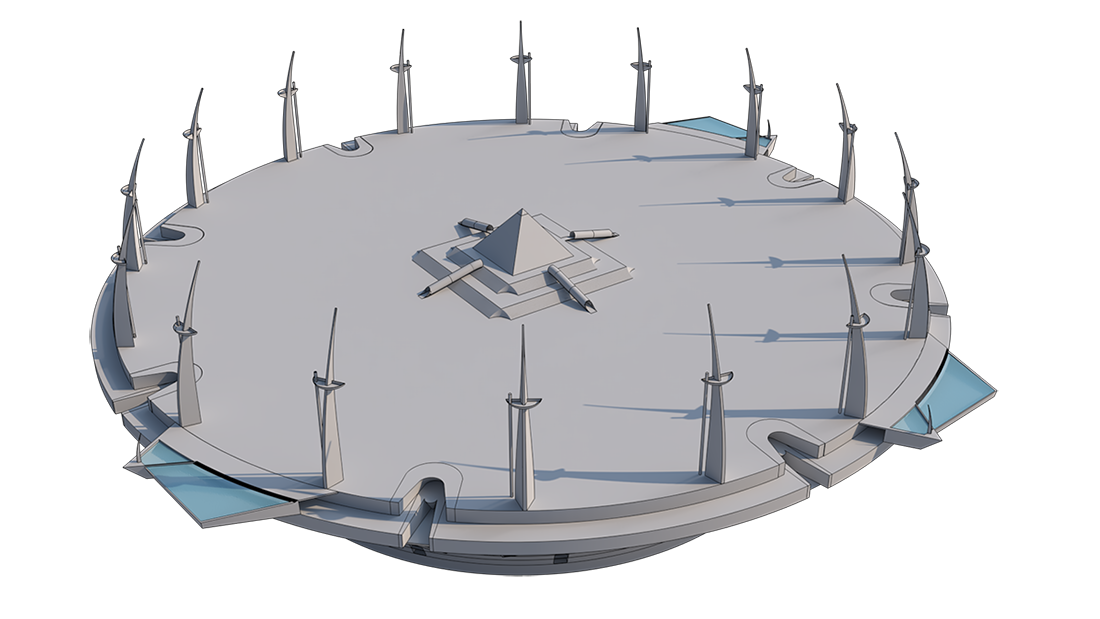 Like Atlantis, the construct is to be a unison of high technology, invention, design and health, creating a Utopia that is not only amazing to behold but also live and enjoy in. It is a socially, ecologically and economically stable and sustainable environment whose splendor will reach every part of the globe.

It is a place oriented toward the health of people, relaxation, entertainment, shopping and just about everything needed to provide one in a lifetime experience. There is nothing even remotely close to that in the world today and it’s less then likely that it ever will.

Very large antennas at the edges of the living area are enhancing the effects of the center pyramid. While the effects can be beneficial to everyone who resides in the city, the proximity to the pyramid increased the potency of effects. Effects of course are very reminiscent of the Energy Pyramid project. Houses, apartments, some hotel rooms, some services and especially health oriented establishments have additional energy equipment to gain access to even more benefits and beneficial effects.

Streets of the top level are wide but not intended for regular cars and motorcycles. Instead, Atlantis will stick with the Eco goal in mind, using exclusively electric and hybrid vehicles deemed ecological enough. Of course walkways are also wide allowing people to walk through the entire city, ride bicycles or electric assistants. 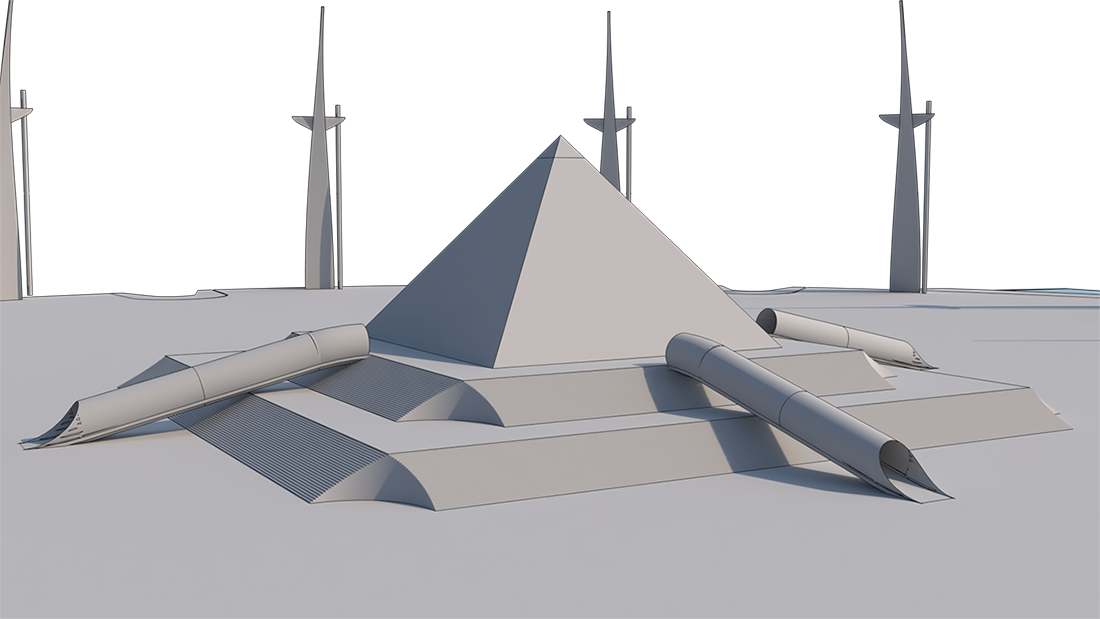 Living quarters are divided into eight segments, each designed and positioned differently to accommodate for many different tastes in the world and create one of a kind city with breathtaking vistas at every corner. Entertainment and service buildings are pushed towards the center of the living quarters so they are equally distant from every living segment.

Going from top to bottom, and vice versa, is possible via stairs, streets and elevators. Stairs and curved streets are connecting every disk and together with elevators, they provide people with the option of desired transportation method. Every street, stretch of stairs and elevator is designed to support people with disabilities.

Second disk is the commerce level. As the name suggests it is a level filled with stores, service buildings and hotels. Selection of stores and services is made to reflect the splendor of the city. Much like the level above it, commerce level has its own streets that follow the same rules as the living quarters. Since second disk is in constant “shade”, LED lighting is there to ensure proper and almost natural illumination. Similarly air vents are placed throughout to ensure the flow of air and temperature regulation.

The bottom level is the one with the largest logistics. After all, having a huge garage and storage is no small task when it comes to organization and providing the most pleasant experience for people and forwarders. Any storage is properly equipped with necessary conditions for food and goods storage.

Atlantis Reborn is a number of different projects coming together into a single wondrous epicenter of human achievement and desire. Design is called Yggdrasil (Norse mythology, Galaxy Tree) and is structured as three surface disks, one above the other. While each disk is a construction area and a world of its own following pre-set security, logistics, design and intent, they are never the less connected into a single operating entity.

We will start with the foundation and bottom disc. Foundation of Atlantis is a very thick layer of concrete to support the whole structure. Middle of the foundation has a hole that houses special energy machines that, like roots of the tree, go from the above discs to the foundation. More on that later. Above the foundation, yet below the first disk, is a circular moat. It is an artificial channel filled with water and assortment of flora and fauna. Moat can be kept only as an artificial body of water, or, if opportunity arises, it can be connected to already existing body of water such as sea, ocean or river.

Right above the foundation is the first disk, the garage and storage disk. Modern life in urban areas teaches us that parking spots and storage areas are a very important part of any structure, more so if the mega structure in question is to be used for both living and tourism. The amount of vehicles and cars can often be unpredictable and storage needs to be out of the way yet spacious enough to hold any assortment of items. Therefore the decision to dedicate one whole level to parking spots and storage is a sounding one, made from experience of designers as well logistics and logical standpoints.

The second disk is the commerce level. It is filled with stores that provide numerous services and products from brands from all over the world. Regardless of their size and amount, stores will be personally selected to reflect the richness of the mega structure but also to provide guests with absolutely anything they might desire. Despite this level being mainly for commerce, it’s design also includes very large terraces with impressive views. Because of the round shaped disks, these terraces are all around and are designed like mini parks where guests can sit down, relax and enjoy. This level also includes several hotels for visitors and tourists that have curved terraces of their own.

The third and final disk is the living area. It is a huge disk divided into nine units – the central energy pyramid and eight settlements separated by main streets. Eight settlements is both the design and visual decision – instead of creating a bland village with same design of buildings everywhere, the village will instead have eight settlements each with its own design. Of course living area also assumes service buildings, restaurants, entertainment centers and more. Houses and apartments inside the settlements will each have an assortment of premade energy technology. Projects such as the Energy Home, Energy Pyramid and The Black Cube, among many others, will be incorporated with houses.

Center of the third disk is a large energy pyramid. It is an incredibly powerful energy machine spanning hundreds of meters – from the top of the pyramid, all the way to the foundation of Atlantis. Edges of the living areas are hosts to tall energy antennas, which are connected to the pyramid.

Isn’t that the question? The fate of Atlantis is in the hands of those who already know where it is, and can imagine themselves standing on its streets. To be less vague, Atlantis can be adapted to any location within the Mediterranean or Tropical climate. After all, Atlantis has a large tie-in to water so it makes sense for it to be close to a large body of water. While not necessary, the city would be much more efficient if it was positioned close to already populated area.